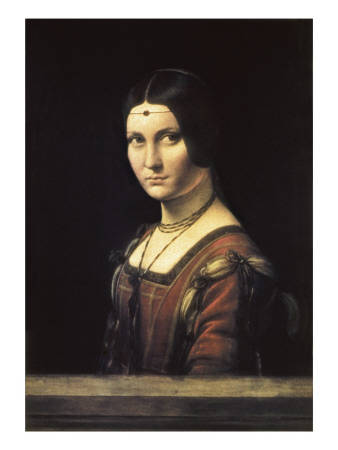 She has been locked in a vault for a long time, while her twin sister enjoyed all the attention and glamour in marvelous rooms of French palace. They look much alike, wearing the same jewelry and dresses, though French sister is not as pale. All those years without sun are not good for girl’s skin…

A controversial painting “La belle ferronnière” was sold at Sotheby’s auction in 2010 for a hammer price of1,538,500 USD, three times its estimate price. There is almost a century long controversy surrounding “La belle ferronnière” – both paintings (the one sold at Sotheby’s and the masterpiece in Louvre) share the same name. The title was given to the painting in 17 century and identifies the woman as the wife or daughter of a retailer of iron goods (a ferronnier), also alluding to a reputed mistress of François I married to Le Ferron.
The fact that both paintings look almost identical creates a controversy in itself, especially when the Louvre painting has been attributed to the hand of Leonardo by some specialists. The portrait depicts a young woman, possibly Lucrezia Crivelli, a mistress of Ludovico Sforza of Milan, and most of the experts agree that it should be attributed to the school of Leonardo da Vinci in Milan, if not to the Renaissance genius himself.

While French sister enjoyed relatively quiet life of admiration in Louvre for over 500 years, the younger sister (as second “La belle ferronnière” is considered a later copy) traveled a lot and even changed continents. In 1920 it was brought to United States by Harry and Andrée Hahn as a wedding present from Andrée’s Godmother, Louise de Montaut, being previously authenticated by French expert as a work by Leonardo. Shortly after their arrival to US the couple decided to sell the painting to Kansas City Museum, claiming that the deal has been reached for $250,000.
The comment by renowned art expert Joseph Duveen that Hahn’s “La belle ferronnière” was probably a later copy of the original from Louvre, has started a long legal battle involving a number of art experts comparing paintings side by side in Louvre. Though all the experts agreed that Hahn’s painting could not be attributed to Leonardo or his school, the lack of art expertise among American jury seemed to be tipping the scale in favor of Hahn’s claim, especially at the absence of any physical evidence. Duveen chose to settle the case, younger “La belle ferronnière” was locked in the vault, while Louvre’s “La belle ferronnière” enjoyed all the attention. The record was set straight at Sotheby’s showing that a value of art goes up over time, even if it is a copy of a famous original, and beauty would always be in style.

I’m glad that young woman’s reputation has been restored and that she was freed from captivity, though we would probably not see her in person any time soon. Oh well – her sister is still in Louvre.